Harry Dunn has always been fit. At high school, he competed in cross country and rowing. During the summer months, Harry would often be on lifeguard duty at Portsea back beach.

You could say fitness was a part of daily life for Harry.

In 2015, a friend convinced Harry to participate in Connor’s Run, an event staged by the Robert Connor Dawes Foundation.

The RCDF was founded in June 2013 in memory of Robert ‘Connor’ Dawes, an inspiring young man who, sadly, lost his brave battle against ependymoma at the age of 18. The RCDF does fantastic fundraising and awareness raising work, contributing funds to Australian brain tumour research, supporting patients and their families and working to inspire the next generation of brain cancer practitioners.

Connor’s Run is an annual 18.8 km or 9.6 km fun run and fundraiser. Harry’s first time participating in Connor’s Run could best be described as ‘successful’ with him finishing in the top 15. So, he was happy with both his performance as well as the knowledge that he was supporting a great cause – a cause that would come to mean more to him than he could have anticipated.

This is Harry Dunn's #MyFitStory


A few months later, in December of 2015, Harry was enjoying some down time, swimming in the surf at Portsea Back beach. Having caught plenty of waves, he made his way to shore. Moments later, Harry experienced a seizure that lasted three minutes. He was rushed to Frankston Hospital for an initial CT scan (while still wearing his wetsuit). The scan revealed a brain tumour in the left side of Harry’s occipital lobe.

As Harry puts it,

“I’ve never been so scared in my life.”

After further tests, surgery was scheduled and Harry spent over a week coping with,

“the raw terror I felt when I had to stomach the fact that my head would be cut open, my skull opened up and my brain cut.” His family were an immense comfort during this time, ensuring Harry was surrounded with loved ones and positivity.

Surgery was a five-and-a-half-hour operation from which Harry awoke with, “unimaginable pain.” Recovery was gradual, as Harry dealt with changes in his vision, sensitivity to light and increased hearing sensitivity. Balance and walking needed to be relearned. During this recovery period, Harry received the news that the tumour had been successfully removed and was benign.

Making a full recovery took the majority of 2016 but to meet Harry now, you’d never know he’d been through such a tough time. His positivity and gratitude are apparent within moments of meeting him. In spite of the trauma he experienced, Harry says he felt guilty for the second chance he’d been given, 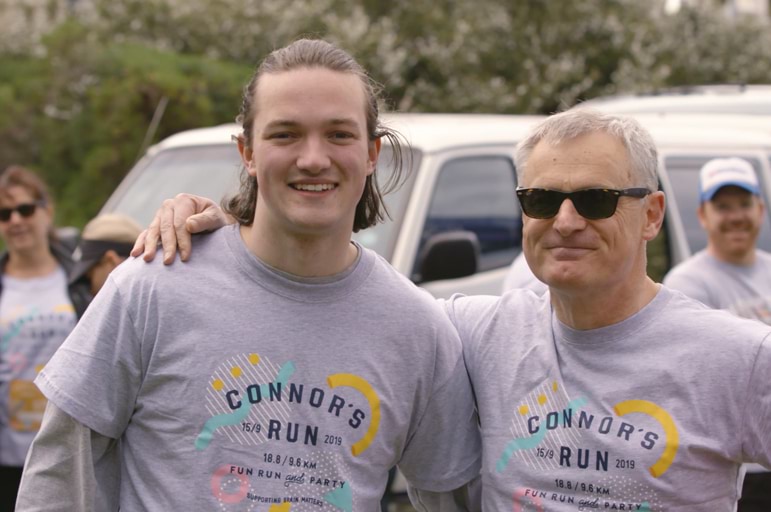 “I felt so, so bad that I walked out of the hospital on my own two legs yet so many people had to stay in the ward and perhaps never leave.”

Which may help explain why we meet Harry on a chilly and rainy Sunday morning in Melbourne, preparing to participate in another Connor’s Run,

“This is the perfect charity to help those in need when times are dark and tough. There aren’t many things better than everybody coming together, having a run, all supporting something so positive, so great. All the way from the start of the course to the finish, it’s all smiles.” Since getting back to full health, Harry has come to really understand the benefits of exercise, not just for his physical health.

“Exercise for me is really important for my mental health. If I go for a run in the morning, chances are my day is going to be three times as good as it was if I hadn’t. I just find myself smiling all day. It’s my happy place.”